Cassava Cake, also known as Cassava Bibingka, is a dessert or snack made with cassava and topped with a creamy custard layer. All you need are five ingredients!

You may also like Creamy Leche Flan, a rich custard dessert.

How to peel and cut fresh cassava

Do not eat raw cassava. It contains naturally occurring forms of cyanide and can be toxic when ingested. Its sweet variety, typically sold in the US, contains less cyanide content and is removed by peeling and cooking. The bitter type requires hours of soaking and cooking before it becomes safe to eat.

(1)Cut both ends of the cassava root and divide them into smaller sections. (2)Make a vertical slit through the skin.

(3)Carefully lift the thick, brown layer with your knife or slice off the peel. Remove any black spots or discoloration. (4)Cut them in quarters lengthwise and remove their woody, fibrous core.

How to grate fresh cassava

Rinse cassava under cold running water and grate them using the fine shredding holes of a box grater.

(1)Use the shredding blade attachment of a food processor. (2)The shreds won't be as fine as we'd like for the cake — don't stop here!

(3)Switch to the "S" blade attachment. (4)Pulse them for eight to ten seconds until they are very fine.

How to make this recipe

(1)Combine egg yolks, ½ can of condensed milk (about ⅔ cup), and ¼ can of coconut milk (about ⅓ cup) in a small bowl. (2)Whisk until combined. Set aside.

(3)Combine grated cassava, glutinous rice flour, and the rest of the condensed milk and coconut milk in a large mixing bowl. (4)Mix until well combined.

(5)Pour cassava mixture into the pan and spread it evenly. (6)Bake for 30 minutes until the top has firmed up.

(7)Take it out from the oven and pour the custard on top. Tilt the dish to spread it evenly. (8)Bake for another 25 to 30 minutes until the custard is set.

Broil on low for three to five minutes until slightly browned around the edges; watch it closely, so it doesn't burn. Let it cool.

If you wish to take it out of the pan, run a knife around the edges and use the parchment paper to pull it out. Cut them into squares.

Cassava Cake can be served warm, chilled, or at room temperature.

Cassava is also known as yuca, manioc, or mandioca. Like sweet potato, yam, and taro, it is a starchy tubular root that is naturally gluten-free. It is sold fresh or frozen in Asian and Latin American supermarkets and some well-stocked grocery stores.

What makes a good Cassava Cake?

Cassava Cake should be soft and slightly chewy, similar to Palitaw (Sweet Rice Cakes). Adding a small amount of glutinous rice flour makes the cake lighter and softer. For more flavor and texture, you can add macapuno or tender coconut strips.

How is cassava used in Filipino cuisine?

In Filipino cuisine, cassava is primarily used in sweet preparations like Pichi-Pichi or Bilo-Bilo. It can simply be boiled, cooked with coconut milk, or made into cassava chips. Tapioca starch made from cassava pulp is the same ingredient in tapioca pearls used in Taho (Silken Tofu with Sago and Syrup) or Buko Pandan Salad.

Can I skip the glutinous flour?

You can, but the texture will be slightly different. Adding glutinous flour makes the cake lighter, softer, and somewhat chewy.

Here are more frequently asked questions on Cassava Cake, including extra tips, troubleshooting, and other information.

Watch how I make it here

Did you make this recipe? I would love to know! Your feedback helps me make better recipes.  Please rate, review, or comment below. Questions about this recipe are welcome, too! 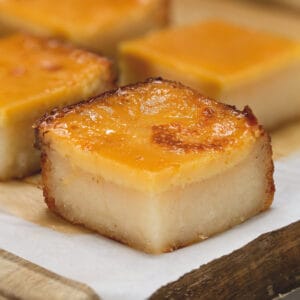 Note: Raw cassava can be toxic when ingested as it contains naturally occurring forms of cyanide. Cooking it properly makes it safe to eat.

Thanks for coming! Let me know what you think: Cancel reply

Hi, I'm Nora! Whether you're new to Filipino food or have loved it for so long, I sure am happy you're here!  I hope you'll find useful recipes that you can enjoy and share with family and friends.

We use cookies on our website to give you the most relevant experience by remembering your preferences and repeat visits. By clicking “Accept”, you consent to the use of ALL the cookies.
Do not sell my personal information.
Cookie SettingsAccept
Manage consent

This website uses cookies to improve your experience while you navigate through the website. Out of these, the cookies that are categorized as necessary are stored on your browser as they are essential for the working of basic functionalities of the website. We also use third-party cookies that help us analyze and understand how you use this website. These cookies will be stored in your browser only with your consent. You also have the option to opt-out of these cookies. But opting out of some of these cookies may affect your browsing experience.
Necessary Always Enabled
Necessary cookies are absolutely essential for the website to function properly. These cookies ensure basic functionalities and security features of the website, anonymously.
Functional
Functional cookies help to perform certain functionalities like sharing the content of the website on social media platforms, collect feedbacks, and other third-party features.
Performance
Performance cookies are used to understand and analyze the key performance indexes of the website which helps in delivering a better user experience for the visitors.
Analytics
Analytical cookies are used to understand how visitors interact with the website. These cookies help provide information on metrics the number of visitors, bounce rate, traffic source, etc.
Advertisement
Advertisement cookies are used to provide visitors with relevant ads and marketing campaigns. These cookies track visitors across websites and collect information to provide customized ads.
Others
Other uncategorized cookies are those that are being analyzed and have not been classified into a category as yet.
SAVE & ACCEPT
117 shares